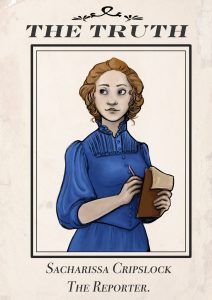 I have a slight confession to make: when it comes to acting I’m an actual, real-life newbie. So you might wonder why on Earth I decided to audition for the show? I knew a few people already in the company, having been to a few of the previous Monstrous Productions shows and felt like it would be something great to try out–so I signed up and went along to auditions.

I was nervous about them, but everyone was great and made me feel welcome. When I was offered the role of Sacharissa… I was over the moon, almost literally jumping for joy! Obviously, I was nervous as well but we started with workshops concentrating on developing our characters and thinking about how we use our movements and vocals, so by the time we came around to acting I think we all felt a lot more confident and raring to go!

There have been a lot of challenges along the way: some expected like learning the lines, others less so, like figuring out how to slap someone without hurting them, but I’m really excited for show week and  putting on an amazing performance!

Peculiar is the type of company that is happy to give new people an opportunity and take people on based on potential, even if they are inexperienced, like I was. The director and the other actors have all been amazing and despite my inexperience I’ve never felt like I’ve been at a disadvantage with them.

So, what is The Truth about?

It’s a great story, all about printing and the invention of Ankh-Morpork’s first newspaper. It follows the quest of one man to unravel the truth of what’s going on in the city. It has humorous moments, but also tries to answer the big questions: how many body parts can a vegetable look like? Is a dog just a dog? Is it never, say, a goldfish? What happens when you call a dwarf ‘short stuff’? This play is going to be a lot of fun, a little serious, with a moderate amount of puns, so please come along and have a great evening!

One thought on “The Truth: A Respectable Reporter”