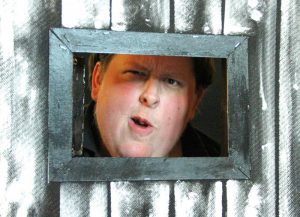 I may as well be open with you from the outset. I have never watched a play, musical, opera or ballet in my life.

How then did I come to play an antagonist in a stage adaptation of a book by one of my favourite authors? It’s a peculiar story, as most good stories are…

Several years ago I answered a mysterious message calling for a completely silent role in a production of Terry Pratchett’s Nightwatch.
“I can shut up” I thought to myself, “And I can exist in specified locations at the same time!” What’s more, I was looking for a productive way to fill my empty evenings beyond watching documentaries and re-runs of NCIS episodes.

I was soon hooked, my buried childhood fascination with storytelling springing back to life! With some practice, advice and imagination I began to work with others to translate stories from the page to the stage.

It’s hard to relate the magick and feelings involved in this kind of work–the way it feels to tread those boards, wearing someone else’s “head”, the sensation of deep-sea diving followed by an intense focus the moment the curtain pulls back…

That’s all well and good, but what can you tell us about working on The Truth?

It wasn’t long before the audition process that I’d re-read the original book, and the character that really stood out to me was without a doubt The New Firm’s Mr Tulip.

There’s a surprising amount of depth to the character, especially for a standalone Discworld novel. Not much is actually revealed about his past or his motivations, but there’s information sprinkled throughout the book that paints a picture of a troubled childhood and unspoken pain.
I would like to think of myself as a character actor, but I never considered I would be given the opportunity to explore such a difficult role.

Yes, one we’ve been rising to so far!! We’ve been fortunate enough to have the time to workshop characters during our earlier rehearsals.
I’ve been doing vocal work to help lower my voice without damaging it as well as working on regional pronunciations.
I’ve also had the opportunity to discuss character movement with a physiotherapist, which I honestly never pictured myself ever doing.
Since then it’s been a case of putting some headphones on with Mr Tulip’s “theme song”, pacing a bit and I’m in the right frame of mind to get to work on the character.

It can be. It’s important to remember, though, that for every minute I put into bringing Mr Tulip to the stage…someone else has spent another 10. Not just with direct things like costuming and props, but riffing with other actors, special effects and small touches like pointing out things that “work” and things that don’t.

There’s a strong sense of community that is really difficult to find.
We’re all working to achieve a common goal, supporting and pushing each other to not only achieve high standards, but develop as people.

John Byron is playing “Mr Tulip” in our upcoming production of Terry Pratchett’s “The Truth”.