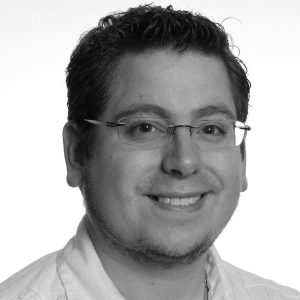 I was really excited to take on the role of Gaspode for this production. As a huge Discworld fan it was really great to get my teeth into another iconic character. Having previously been cast as Maurice in ‘The Amazing Maurice and his Educated Rodents’ it wasn’t a shock to try and portray a talking animal on stage. However, the differences from that production to this one are vast.

In Maurice the company had opted for full costume, which meant the acting was more traditional. For The Truth we have a fantastic puppet to work with. This has meant all of the acting has come from facial and vocal emotes. Bringing a puppet to life is a new challenge for me and it’s been really great to work on little ticks and movements to draw attention to the puppet as much as possible.

It’s been a challenge and required plenty of extra consideration on how lines are delivered, spending extra time considering how my own facial features help. Even though the actors are looking at the dog, the audience will still be seeing the facial actions that help convey Gaspode in the fullest way possible.

We did a lot of work early on in workshops, thinking about how we moved and spoke. This was an excellent opportunity to really think carefully about moving around as Gaspode and trying to get a ‘dog’s eye view’ of the situation. Every step he takes, small movements on the puppet and emotions he conveys have been worked on from the start, to help ensure we’ve all been working with the ‘real’ Gaspode, rather than his operator!

Gaspode is such a funny and loveable character, the charm of the puppet and the dialogue he gets has really helped bring it to life. It’s been really entertaining interacting with other actors and the stage while trying to breathe energy into him while knelt on the floor. Picking up on his unique voice and mannerisms has been an interesting challenge as well. I’m really proud and excited to be bringing along everyone’s favourite dog to the stage!

It’s been exciting to work with Ellen as the Director. Her experience in theatre has been highly beneficial for the company and her passion for Discworld clearly shows through in this piece. Taking the extra time to begin with has really helped a lot of the cast understand their characters, which I hope will bring them to life like never before in our production this year!

Matthew Hitchman will be playing “Gaspode” in our upcoming production of “The Truth” at The Gate Arts Centre, Cardiff by Terry Pratchett, from August 22nd to 25th 2018