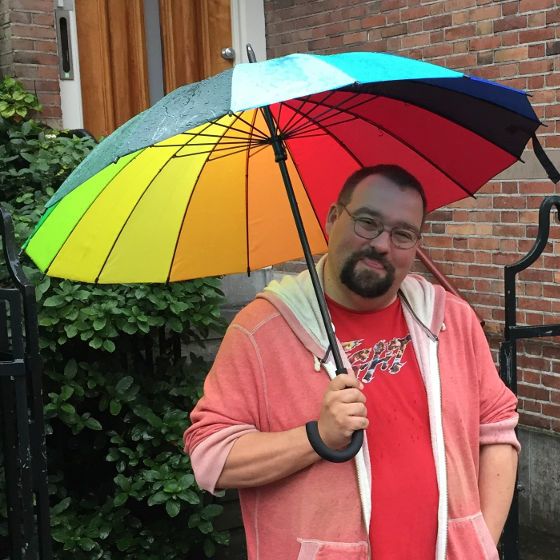 Our featured actor this week is lovely Terrance, playing eyes and ears of Sidley Park, the butler Jellaby, in ‘Arcadia’.

With Monstrous Productions Terrance played roles such as Mr Vitoller in ‘Wyrd Sisters’, and in our August show ‘The Truth’ was the shady Lord de Worde. He also uses his talents behind the scenes with Watchers Productions, writing and producing for them in addition to occasional on-screen acting.

As a butler, Jellaby is loyal, efficient, organised, precise, and detail-orientated, all things I’d like to think I am.

I’m more discreet. Jellaby’s fond of a bit of gossip, whereas any secrets are safe with me.

Yes. The purple iris – I love the vivid contrasting colours. I like it so much, I had an artificial one as my buttonhole when I got married.

It’s something very different to what I’ve been used to doing. There’s no dragons, witches, or talking animals. It’s fun to be doing a more traditional play.

Getting used to performing in a new space- we’re at the Paget Rooms in Penarth for Arcadia. Also, the play has a static set so there’s no bringing furniture on and off. The final scene also provides some technical challenges of its own, and I can’t wait to see how it all comes together.

There’s a lot of great characters in Arcadia, but I particularly like Lady Croom – Stoppard has given her some wonderful one-liners and turns of phrase.

It won the Olivier Award for Best Play, and was shortlisted by the Royal Institution as one of the best science-related books ever written. It’s a beautiful mix of comedy and drama, with some of the wittiest and cleverest writing you’ll hear, ably performed by a superb cast supported by an excellent crew. You couldn’t really ask for more.

If you could have any super-power, what would it be and would you use it for good or mischief?

I’d like to have the power to travel through time. I’d do exactly what Henry does in The Time Traveler’s Wife; go forward to a week when there’s a massive lottery win that isn’t claimed, get the numbers, go back in time and pick them out. I’d set myself and my family up for life. Whether that counts as using it for good, or mischief, I’m not sure.