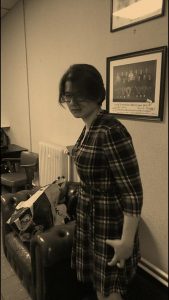 The Truth Shall Make Ye Fret – and fretting we are!

As Show Week (TM) approaches, the emotions and excitement are reaching fever frenzy. But it’s great; seeing how far the Peculiars have come since the first read-through of our debut show as a new company.

Everyone has developed and explored their characters so much – the five months since rehearsals started have given everyone the opportunity to really discover and learn to love their characters.

An emphasis on character development and theatre-craft in the first few weeks meant that everyone came into the first few rehearsals with some basic experience under their belt. Our diverse cast has a range of experience, but everyone shines under those stage lights.

That could also be the sweat.

Having come in midway through the previous company’s lifespan, becoming part of Peculiar Productions was a no-brainer. This group is a big family – sure, we have our fall outs and our awkward dinners and drunk relatives but at the end of the day, when it really matters, we help each other. Everyone is a great big bunch of nerds that want to bring a little bit of magic into our mundane world and to have fun while doing it.

And all proceeds will go to Cardiff Mind!

Ellen Warren’s direction of The Truth has been fun – we are encouraged to really think about what our characters would be doing in each scene that we are in. She is open to input and change and some of the best laughs in the play have been improvised by the cast themselves during rehearsals. Scene changes are more fluid, blackouts have been reduced to the bare minimum and some incredible sound and lighting work by Joe Davey and Sam Lewis really set the scenes.

The staging, like the Press (lovingly hand-built by the crew), is a living, breathing thing, constantly in motion. It will also save a lot of stubbed toes for the crew as they don’t have to shuffle heavy objects around in the blackouts.

(At this point in the interview, Katya began looking into the distance, as if remembering old injuries)

I play Sergeant Angua of the Watch in dogged pursuit of our protagonist, William de Worde (played impeccably by Loz Shanahan) and am somewhat a slight antagonist to him along with Commander Vimes, reprised by Jes Hynes.

Personally, I think that Mr de Worde is interfering with our collar. His assistants can be like dogs with a bone, especially that Sacharissa – Caitlin Bamber really captures fiery journalist like no one else.

Mr De Worde’s other associates – the Goodmountains (Josh Flynn and Beth Lisles) and that flouncy vampire Von Chreik (played with much dedication by Josh Stevenson-Hoare) are further pains in our side. Although, I will admit that they were somewhat helpful in uncovering the truth but I’m sure the Watch would have managed to hound down the criminals.

The Truth is a fun and intriguing play that touches on both the light hearted – TrixieBell, here’s looking at you – and the serious; as an immigrant to the city
of Ankh-Morpork, Angua has a chip on her shoulder, much like the others, and the play touches on the insidious nature of racism in a cosmopolitan society run by the tyran – uhh, free-thinking Patrician, Vetinari (Michael Dickinson).

As with most of the Late Great Sir Terry Pratchett’s work, The Truth retains the delicate balance of both social comedy and social tragedy.

But don’t take my word for it – come and see for yourself!